I really love it when things go mainstream that we talked about oh well 2.5 years ago at a Future Salon.

Google Image Labeler is based on the ESP Game that Nicole Lazzaro was presenting at  the Future Salon in May 2004:

One of my discoveries of the evening was the ESP-Game developed at Carnegie Mellon:

The ESP Game was developed by Luis von Ahn, a graduate student in computer science at Carnegie Mellon. He developed the game to try to help solve the problems associated with searching for images on the Web.

Currently, search engines use the names of image files and words around them to find images. Computers are not very good at distinguishing images from each other using visual cues. Humans, however, are great at this, and von Ahn’s game puts that power to work. While people entertain themselves, they are also helping to label the hundreds of thousands or more images on the Web, which will in turn make searching for images more efficient.II

I am a bit disappointed how few changes or additions they did:

Oh may be in the next releases. So far it is just some Google look and feel difference, which is a bit disappointing. Where is your creativity Google? (via TechCrunch) 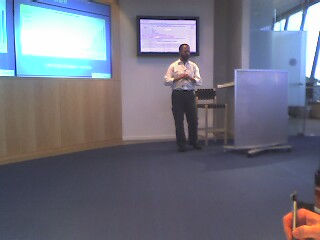 Wow the first ever World Premiere at a Future Salon:

Scott Rafer released the Feedster Tagging Prototype. He introduced it as the next stage of tagging.

To find out why tagging is important check the Wikipedia under Folksonomy or read Clay Shirky's Ontology is Overrated: Categories, Links, and Tags

Not everyone is or will ever have or use a del.icio.us account. The new feedster service makes it easy to extend tagging to everyone who visits your site. Scott posted the code I added it to the Future Salon Blog and you can add it to your site too.

Wow, we are getting quite some traction on Google. The question is of course how warranted that is :-)

If you search for Numenta Jeff Hawkins' super interesting new AI company based on the research of his book On Intelligence our Weblog post is number three right after the company webpage itself and before the Mercury News. Shouldn't that sway him to present at an upcoming Future Salon? Jeff, you will get the best questions from our audience I promise :-)

Power of an open API

You never know what crazy stuff people out there com up with:
Spell with Flikr (via Jeff Nolan)

Yakov Shafranovich created the track2RSS project where you enter your tracking number and you get an RSS feed back that lets you stalk your packages in your favorite RSS reader. Sweet. At O'Reilly's xml.com Yakov gives some background to the program.

That is up there with the custom RSS feed for Ebay searches and of course Craig's list: Put in your search like: "Mountain Bike" scroll down the page and in the lower right corner there is the link with the RSS Feed. Subscribe and from now on the listings come to you. Sweet.

Interactive TV finally at an Amazon near you 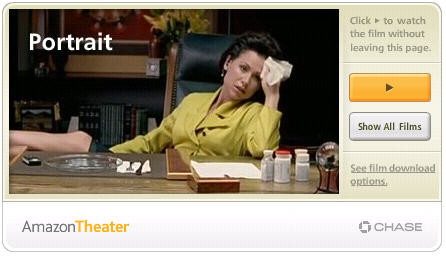 The years old marketiers dream of interactive TV, where you can buy anything that is shown in the moving pictures right there is finally coming through at Amazon Television.

Lame-o story packed in a short film with Minnie Driver as the star to give it the air of sophistication. At the end of it you can buy the things you saw right there at Amazon. Great marketing idea, soso execution (BMW Films did a better job, probably better budget too). Still it will be a sure success and make Jeff Bezos more to shoot it into space, for the greater good of all of us I am sure.

Last Thursday I attended the Technoraty Party in their swank new location close to the ballpark. Swank only in comparison to their old funky office that was warm in the summer cold in the night and loud during the day because of the construction going on at third street. I met Tantek Celik their and told him about the Accelerating Change 2004 and that Will Wright will talk about how he approached the design of landscapes in The Sims 2.

By the way Will is nominated for the Visionary of the Year prize by the Billboard Magazine for his work on the game. Rightly so, they have chartered new ground in integrating Artificial Intelligence in the design of the game. The Not so simple Life article in the Mercury News the other day wrote:

What's remarkable about this computer game, being released worldwide Tuesday , is that the domestic drama is not scripted. The characters act the way they do because that is what naturally unfolds. It's a quality dubbed ``emergence,'' based on the history of the characters' relationships and their own artificial, or preprogrammed, intelligence.

Electronic Arts, which is publishing the sequel to the bestselling ``The Sims,'' believes this leap forward in artificial intelligence is what will keep gamers by the millions entranced with their virtual Sims. ...

``It brings the game into a more dramatic space,'' says Will Wright

Tantek remarked something interesting. At the moment all this MMOG are living on their own little islands. Tools are needed to build your own Online World. API and standards should be defined for interoperability, so I can visit yours and you mine.. The one who figures that out will eat the other's lunches and Technorati tools would help with the finding and connecting of these do it yourself online worlds. If you look at evolution regarding finding and creating connections we are only at the stage of may be amoebas soon there will be multi-cell organisms and off we go. For sure these standards and interoperability are no trivial problems and currently not in the interest of the game designers.

I am curious what the experts will say to that suggestion at AC2004. For example Cory Ondrejka VP of product development from Linden Labs the creators of Second Life. The great thing with that game is that it gives the player the tools to create their own world. Don't know how sophisticated these tools are, but in principle the limit of Second Life's growth is only the imagination of their players and the size of their servers.

Massively multiplayer online games (MOGs) come in many shapes and sizes, from EverQuest to City of Heroes to Second Life to The Sims Online. But no matter how self-contained a MOG is designed to be (it's a sliding scale), these virtual worlds consistently end up coloring outside the lines of simple fun and games.

Like Jurassic Park with avatars instead of dinosaurs, players routinely pour over the designers' intended boundaries and take over the park, at least partially (hat tip to Jeff Goldblum). This really miffs some of the hardcore gamers whose immersion is disturbed by glimpses of the workaday world outside, not to mention those gaming companies that want to put a smackdown on secondary markets for virtual goods.

The whole thing is rather complicated, what with its who's who of legal, creative and ethical issues. What does seem clear is that as the degree of freedom and quality of simulation within digital environments rises, the pressures of real life suggest new capabilities in areas ranging from education to business to rapid prototyping to military training to dating.

The Virtual Space theme of this year's Accelerating Change conference explores the future of reality gaming and massively multiplayer environments by bringing together some of the most savvy and visionary thinkers on the topic of digital worlds which embrace the real world. Will Wright, creator of The Sims, and Cory Ondrejka, Second Life developer, will provide keynote presentations that should not be missed--"Games as Prosthetics for the Imagination" (Will), and "Living the Dream: Business, Community and Innovation at the Dawn of Digital Worlds" (Cory).

Following Will's talk there will be a debate entitled "Real Money in Virtual Economies: The Future of User-Created Content" between Jack Emmert (lead designer of City of Heroes) and Steve Salyer (new President of Internet Gaming Entertainment--the world's largest secondary market for virtual goods and currencies), and including Cory Ondrejka.

For more conference information and a full list of speakers go to http://www.accelerating.org/ac2004. Early registration ends on September 30th.

Update: I reread this post, and realized, that I didn't link to Extreme Democracy. Just to set the record straight: Tom Atlee will talk about his work and book The Tao of Democracy. Ross Mayfield will introduce us to the concepts behind Extreme Democracy and Zack Rosen will show us the latest version of CivicSpace.

If you check Amazon for The Tao of Democracy You will find rave reviews of the book. The one from the top 100 reviewer Robert D. Steele is especially interesting: This book focuses on what comes next, after everyone gets tired of just "meeting up" or "just blogging." This book is about collective intelligence for the common good, and it is a very fine book. He is missing the following: Still lacking--and I plan to encourage special organizations such as the Center for American Progress to implement something like this--is a central hub where a citizen can go, type in their zip code, and immediately be in touch with the following (as illustrated on page 133 of New Craft):

It's election time, but of course the Future Salon looks beyond Swift Boats :-) One of the inspirations is the upcoming Extreme Democracy book: "Extreme democracy" is a political philosophy of the information era that puts people in charge of the entire political process. It suggests a deliberative process that places total confidence in the people, opening the policy-making process to many centers of power through deeply networked coalitions that can be organized around local, national and international issues."

Another inspiration is The Tao of Democracy by Tom Atlee who has thought about, written and spoken for twenty years on innovations in democracy. Paul H. Ray, Ph.D co-author of The Cultural Creatives sais about his book: What Tom Atlee is writing about is just about the most important thing that's happening at the beginning of the twenty-first century.

Over a year ago John Abbe pointed the Future Salon in his direction by posting links to chapers of his book. There for the first time I got introduced to the excellent concept of citizen deliberative councils.

Third inspiration are the tool makers, like the volunteers that created the DeanSpace and now are knitting CivicSpace, an open-source grassroots organizing web-application toolkit .

The beauty is, that on Thursday the 16th of September we bring these three rays of hope together and let them shine at the Future Salon.