If you missed the excellent Journey Beyond Fear Future Salon with John Hagel the other day.
Don't worry, here is the recording:

I think John's book is one of the most important ones from the last 10 years. The accelerated rate of change leads to ever-increasing performance pressure. We can react to that with fear or we can embrace the opportunities that the change is offering.

In the Journey Beyond Fear John details the three elements that he sees as the key to thrive in this ever faster-changing world:
1) Develop a positive narrative that motivates you and the people around you.
2) Curate the passion of the explorer in everything you do.
3) Create impact groups of 5-15 people that work together on a weekly basis on improving their impact around their topics.

John starts 7 minutes in, with an intro to key topics of his book, and then we have a lovely conversation with the Future Salon participants for another 60 minutes.

In a May 2010 Future Salon, Dino Karabeg, Associate Professor Institute of Informatics University of Oslo, brought us his approach to making global changes (see Future Salon video).  He has returned from Norway for a  brief visit to the Bay Area 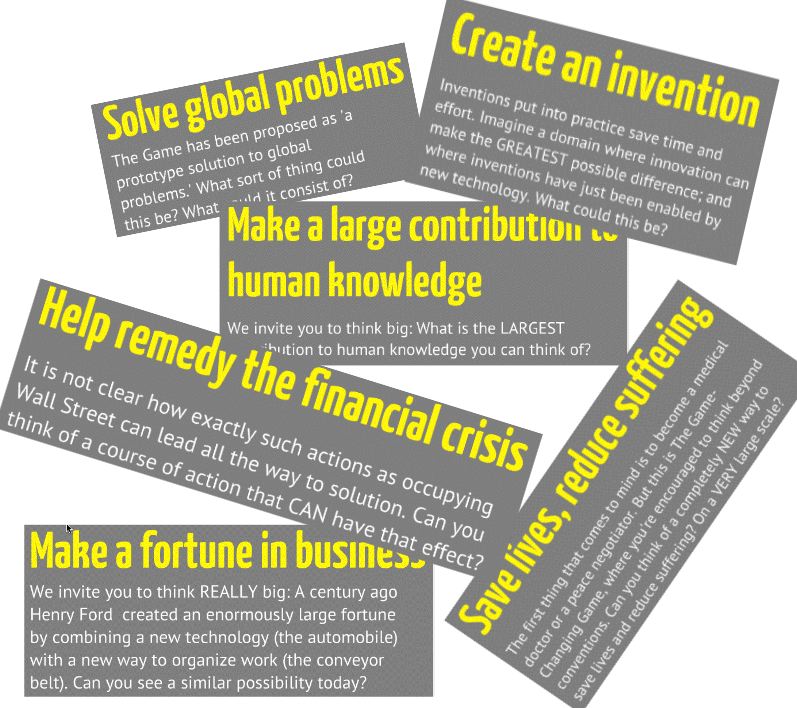 and we have him for an update with the 10th Trimtab.  Join us July 16 at SAP Labs North America, Building 1: Please follow signs to our room. SAP is located at 3410 Hillview Avenue, Palo Alto, CA 94304. Free and open to the public. Please RSVP. 6pm Networking 7pm talk/game.

"It is absolutely necessary to find a way to change course," wrote Aurelio Peccei, the first president of The Club of Rome, based on a decade of research and this think tank's view of the global condition in 1980. The Game-Changing Game (a real-life, collaborative game-like strategy), which we will begin playing together at this event, is offered as a prototype solution—a practical way to change course—which is already being implemented in practice.

Two years ago I orchestrated a dialogue at the Future Salon about `trimtabs for systemic change,' where I introduced nine ongoing projects with course-changing potential. I am now coming back with the tenth systemic trimtab; but this final trimtab is generic—The Game-Changing Game is a practical `machinery' for systemic change in any domain, or for systemic innovation, as I prefer to call it.

The Game begins by offering a choice of eight career or life goals. Each choice is followed by a reflection, inviting the player to aim high. A hint is offered why uncommonly high achievements are reachable within The Game. The rest—the substance—of The Game consists of a Vision Quest, where the players find a strategy to be followed along which such high achievements can be reached; and of an Action Quest, where a collection of already active projects, ready to be joined, is discussed and offered.

A salient characteristic of The Game-Changing Game is that information technology is being used in its projects as an enabler. The Game offers a vision of a mature Information Age, where `making the world work for all' is a business niche for information technology; and where a way to get there is offered by creating a synergy between business and humanistic interests.

Even though we had the biggest financial breakdown since the great depression, so far no fundamental changes that I know of to our economic system have been implemented. It sets us up for a similar crisis in the future. This is the first Future Salon in a series where we are looking at alternative economic solutions.

One of the problems was, that even Moody's and Standard & Poor's AAA rated companies were falling. Their risk assessment was useless. This month's Future Salon speakers are working on solving that problem by bringing transparency and competition to risk assessment.

Please join us at the FreeRisk Future Salon on Thursday the 20th of August 6pm please RSVP http://budurl.com/j6n2.

Abstract: Brain Plasticity Revolution
We’ll discuss the principles of brain plasticity, on the way to explaining the bases of origin of individual human abilities and the ‘Persons’ who employ them.  We’ll describe how this science has been employed to improve or transform the lives of children and adults in need of neurological help.  We’ll consider some of the greater societal implications of our new understanding of the brain-plasticity bases of normal and abnormal human behaviors.  We’ll try to explain how the empirical, pragmatic and substantially fictitious notions about our self-development and about our humanity that have provided the primary bases for the education, organization and control of human societies are now being challenged by a scientific understanding of the true nature of the processes that account for them.  In its implications for how we view ourselves and our rapidly evolving cultures, this new perspective about our true, limited natures may provide the basis for rapid, further societal degradation -- OR guide us toward large-scale societal corrections, and cultural rejuvenation.  We’ll end our conversation by discussing a few strategies that might guide us toward that better path.

We are webcasting via Ustream again: http://tinyurl.com/6776ry  Sound may be a problem as the aplification is not working. If you are coming and have a portable amp, please bring it. Otherwise John Smart and I will do Opera projection ;-)

Both Jaron Lanier and Eliezer Yudkowsky have been Future Salon speakers. Eliezer focusing on creating a general artificial intelligence, Jaron working for years on similar problems, but rejecting the as he calls it the religious aspects of the AI field.

Just last week someone asked me for the transcript of Jaron Lanier ramps up the McLuhan Ramp Future Salon. Worth checking out.

After Eliezer's Hard AI Future Salon, which is equally interesting, he told me he would love to debate Jaron again. I think it is, because there aren't many people that have thought about AI so deeply and came to a different conclusion than him. Jaron on the other hand looks at the beginning like thinking: "Oh, why did I agree to this?" ;-) It may be that I don't know him enough and that is just in general how he comes across.

If there wasn't the word brainiac already you would have to invent it for these two.

This one stuck: Jaron: Consciousness is not a phenomenon it is in a class of itself. Here is that part of the debate: The point of trying to explain consciousness (07:00)

Eliezer a couple of times referred to Daniel Denett. Thought I add a link to him too.

Posted by Finnern on November 22, 2008 in Science | Permalink

The Top 10 Neuroscience Articles of 2005

It's that time of year again for "Year in Review" type stuff.

"The spatial and temporal (time) resolution of brain scanning is also progressing at an exponential rate, roughly doubling each year, like most everything else having to do with information."
-- Ray Kurzweil

The Next Five U.S. Disasters & The Future of Disaster Relief

We're not sure that anyone used these exact words, but it cannot be denied that in the wake of Hurricane Katrina's destruction of New Orleans, the overriding attitude from the scientific community was "We told you so."

Which made us wonder: What other natural disaster do scientists know are coming that we will all pretend we knew were coming, too? If you answered, "Major California earthquake," you're wrong. Even the illiterate know that California will one day be an uninhabited island visible only from the beaches of Utah.

We wanted to dig deeper....[The story gets more serious and outlines possible scenarios for next five U.S. natural disasters.] - "The Next Five Disasters", The Wave Magazine, Oct 5-18, 2005

Before we get to the list of U.S. disasters waiting to happen, I'd like to point you to the Recovery 2.0 Wiki which is meant to prepare in advance for the next disaster in terms of web & internet & tech infrastructure. Instead of scrambling to get fundraising and disaster relief wikis and people finders up after an event, why not plan ahead?

Maybe even ways to disseminate information quickly as a disaster strikes to save lives (personal experience: even five minutes would have saved many thousands of lives this past Dec 26th). Even if that's simply SMS. For instance (yeah, I know this isn't totally feasible in US), "the Shanghai city government issued a text message to mobile telephones late on Sunday" warning residents of the impending deadly typhoon recently. Ideas? Contribute at recovery2.org. Also keep an eye also on Jeff Jarvis' blog for Recovery 2.0 and Technorati tags recovery2.0 and recovery2.

Every seismologist and geologist  is familiar with the mega-landslides that have  taken place on the sides of volcanoes over the past 20 million years...

A mega-landslide off the Canary Islands, which [research geophysicist Dr. Stephen N.] Ward calls "one of the steepest places on earth," would result in a wave that is still more than 100 feet tall when it hits the eastern seaboard of the United States.

I'm seeing more and more about this flu in the news. There's fear that if the virus mutates then human-to-human transmission could make this flu pandemic worse than the 1918 outbreak of H1N1, which killed 500,000 Americans and 50 million people worldwide.

Check out the October feature story in National Geographic is: The Next Killer Flu.

"The administration has failed to prepare adequately for a flu pandemic," said Senator Edward Kennedy, Democrat of Massachusetts. "The danger of a major hurricane hitting New Orleans was ignored until it was too late. We can't make the same mistake with pandemic flu." - "Bird flu preparation goes global", The New York Times, The Associated Press, Reuters, October 6, 2005

Read more about how we're preparing for the possibility of the bird flu and what scientists are doing with genetic studies including combing for the ancient 1918 virus from autopsy tissue and even flying to Alaska to dig up a mass grave buried in permafrost.

This one is going around like wildfire. If tru rightly so:

SCIENTISTS have created a “miracle mouse” that can regenerate amputated limbs or badly damaged organs, making it able to recover from injuries that would kill or permanently disable normal animals.

Scientists please hurry up, I already have a missing tooth and all these fillings I would like to replace with real ivory :-)

Nice little article about Moore's law in the Mercury(free subscription). What I didn't know was that Carver Mead coined the term and that Moore was embarrassed about it:

All of the fuss over Moore's Law comes as a bit of a surprise to Moore himself. He says he was embarrassed when his friend Mead coined the term ``Moore's Law,'' and he couldn't bring himself to utter the phrase for about 20 years.

If that is true, you should get to know more about it and there is a whole conference focusing on this theme again this year: The Accelerating Change 2005. We are happy to announce that Ray Kurzweil will keynote the event.