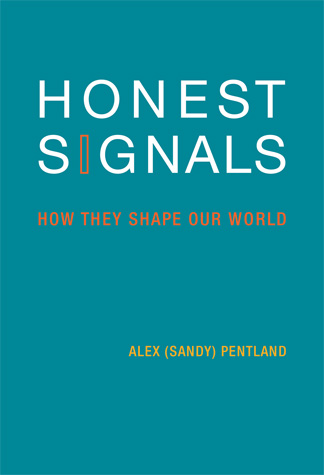 Update: Wyane Radinsky found the video of the Elevator experiment. See further down.

As a good host of the Reality Mining Future Salon happening today Thursday 25th of March, I got MIT Professor Sandy Pentland's latest book: Honest Signals: How they shape our world.

Turns out, that our non verbal signals are the better predictors of outcomes in situations of our daily life. Not only that, but that we are highly influenced by the group that surrounds us. We are mimicking the people that we are with, even complete strangers.

I once saw a candid camera episode where a person walked into an elevator with two people already in there. Once the new person has settled in, the other two turned around and faced the wall instead of the door. Like puppetry the third person would turn around too. The force was so powerful.

Sandy Pentland writes the best theory to explain charismatic people is, that they are those who are particularly talented at reading and responding to social signaling. It might even be that charisma is the other end of the autistic spectrum: a genetic variation that affects the ability to read and display social signals, and that is more associated with males than females.

An important finding of his research was, that we could use the social signaling to accurately determine each person's group and task roles. This means that we can build on sociometer readings to create a computerized feedback system that helps groups steer away from groupthink and polarization. -- That I think could be really powerful.

Our ability to make group decisions may have evolved from an ancient signaling mechanism that is based on a market of ideas rather than on deduction.

That is how far I got with the book. For sure very interesting and relevant for everyone. Please join us tonight Thursday 25th of March at SAP Labs Palo Alto 3410 Hillview Avenue Room Cafeteria. [map]. Free and open to the public. Please spread the word and invite others.

Attention: Sandy Pentland will have to take a red eye out to Atlanta that night, this is why we will start at 6pm already and we will do networking afterwords. Be on time or you will regret it.