Let's end the Future Salon year with a bang: 9 steps to a healthier happier you presented by Mark Allen  6 times Ironman winner and Brant Secunda a shaman, healer and ceremonial leader in the Huichol Indian tradition of Mexico. Tuesday 10th of November 6pm at SAP Labs in Palo Alto. Please RSVP http://tinyurl.com/ybclfbp. Fit Soul Fit Body, 9 Keys to a Healthier Happier You

World-renowned shaman Brant Secunda and legendary Ironman Mark Allen will talk about their bestselling book, Fit Soul Fit Body. They will speak about how to become truly fit from the inside out and take your life to the next level. Whether you’re training for an athletic event or just want to improve the quality of your life and how you feel about yourself, Fit Soul Fit Body - 9 Keys to a Healthier Happier You is about everything that makes you well.

Think you know what it means to be fit? Think again.

Let’s face it: fitness goes far beyond how long it takes to walk or run a mile. When you’re stressed out, emotionally drained, overworked, overweight, and not satisfied with your physical body, you can’t get much of anything accomplished—at work, at home, on the race track, wherever and in whichever capacity.  Put simply, when you’re spiritually unfit, life is a greater challenge. That mythical “balance” you’ve always dreamed of achieving was just a myth. Not anymore!

Mark Allen was one of the top triathletes in the world but struggled to overcome the barriers that were preventing him from winning the grueling Ironman World Championship Triathlon in Kona, Hawaii.

Then he began studying with Brant Secunda, healer and teacher in the Huichol Indian tradition of Mexico. Brant is the only Westerner to have completed a 12-year apprenticeship with Don José Matsuwa, the revered Huichol Indian shaman who lived a vibrant, happy life to 110 years old. Brant taught Mark the spiritual and healing exercises that allowed him to integrate his physical and psychological fitness. He gives Brant much of the credit for his remarkable success.

Mark went on to win a never-before-achieved six Ironman World Championships in a row, and was eventually dubbed “The World’s Fittest Man” by Outside magazine.

Brant Secunda is an internationally acclaimed shaman, healer and ceremonial leader in the Huichol Indian tradition of Mexico. He completed a twelve-year apprenticeship with Don José Matsuwa, the renowned Huichol Shaman who lived to be 110 years old and who adopted Brant as his grandson. Alongside other dignitaries including President Jimmy Carter, Brant cofounded the Peace University in Berlin, and is a founding member of the American Herbalists Guild and has taught at the American Holistic Medical Association Annual Conference.

Brant lectures at conferences and universities worldwide, and since 1979 has been the director of the Dance of the Deer Foundation Center for Shamanic Studies in Soquel, California. He has worked with many organizations including The World Health Organization and the American Holistic Medical Association, was the cofounder of the Humanistic Medicine Congress in Germany, and was a nominee to be a recipient of the prestigious MacArthur Award for his service worldwide. He leads seminars and retreats at spectacular places of power like Japan, Crete, the Italian Alps, Alaska, Mt. Shasta in California, and the Grand Tetons in Wyoming. His work has been documented on television, radio, and in articles and books throughout the USA, Europe and Japan.

Mark Allen is a six-time Ironman World Champion. He has been called “The World’s Fittest Man” by Outside magazine and “The Greatest Triathlete of All Time” by Triathlete magazine. He attributes his success to his ongoing studies with Brant Secunda, who showed him how to find fitness not only in physical strength but in the power of personal spirit and balanced living. Mark and his races have been featured numerous times on major network television and in national publications; he has appeared on more than 100 popular covers worldwide.

Since leaving the sport after a successful 15-year career while still at the top of his game, Mark has worked as a sports commentator and advisor for NBC.  He’s also consulted with and spoken to many Fortune 500 companies, including American Express, Honeywell, Northwestern Mutual, and Oracle.  He developed “Forever Fit,” a special program designed to help people live a healthy life.

Brant and Mark continue to work together at events and retreats around the world and to develop Fit Soul, Fit Body programs. Their book was inspired by a successful workshop they created 12 years ago for people in the US and Europe seeking practical tools for transforming themselves from the inside out. The tenets of Fit Soul, Fit Body offer the ultimate, unique roadmap for fostering optimal health, happiness, and wellbeing.

SAP Labs North America, Building D, COIL (Co-Innovation Lab). SAP is located at 3410 Hillview Avenue, Palo Alto, CA 94304[map]. Free and open to the public. Please spread the word and invite others, but be sure to RSVP http://tinyurl.com/ybclfbp so we know how many people to expect.

Calling all geeks who want to build the next economy!

Cool event organized by Flowplace happening this Thursday 9am PST.

Have you always wanted to be part of the challenge of building the next world? ... If so we might have something for you:

We are building an open platform of protocols and languages for creating currencies that will give birth to the next economy.  This suite of tools will allow every human being and every community to build and share wealth the way they need by means of free currencies:

We have begun implementing these projects. Various tools and protocols already running and progressing, being tested and improved every day, but this is not enough. We believe this next economy will completely change our way of building and exchanging wealth. To make it accessible to more people, more people need to get involved; so we invite you to join and help us building and constructing this next world together.

The Event : Meet the geeks

We will use a Livestream channel to explore the topics of "open data", "open transport" and "open rules" which are the basic components of the metacurrency project. We will watch some videos and chat live with the metacurrency team to answer your questions and update you in our current edge and projects status. We will also speak with TheTransitioner team to explore the concept of the flowplace and provide with the next steps you can take if you decide to join us.

Bummer I probably can't join, but would love to have a Future Salon around democratic currencies.

Many of you don't know that I am one of the people that built the very vibrant SAP Community Network: 1.8 million members and ~7000 posts per day in the forums.

When we started 6 years ago, very few people saw the power of community, collaboration or co-creation. The big advantage for us was, that we had a lot of freedom to experiment and try things out: Blogs, Wiki, point system, face to face meetings, while expanding our reach outside as well as within SAP.

By now the world has awoken to the opportunity that an active community brings with it, even though I believe we are just scratching the surface of the possibilities.

What we have done was mostly grassroots. Yes, we had a mandate from the board to create a developer community, but not one to apply the community advantages to all aspects of the business.

This is why I am so happy about this months' Future Salon speaker Nilofer Merchant. She has almost finished her book: The New How Building Business Solutions Through Collaborative Strategy. 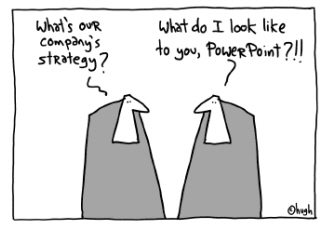 How do you best run your company with the new realities of collaboration and co-creation? That question and many more will be answered this Thursday the 17th at the Collaborator's Dilemma Future Salon.

Ray Kurzweil and Vishal Sikka: “The Accelerating Pace of Change”

In 2004 and 2005 I helped John Smart organize the Accelerating Change Conferences. At both of them Ray Kurzweil gave the keynote. (In 2004 Ray tried to be present via hologram from New York, but the technology wasn't there yet and we ended up with a conference call.)

His prediction is, that within the next 20 years, technology will accelerate to a point, where the computational power of computers will surpass human intelligence: The Singularity. Check his presentation at Google from 2 months ago, if you want to get his latest insights.

The cool thing is, he will be the keynote speaker together with Vishal Sikka from SAP at SAP TechEd in Phoenix later this year.

Vishal is one of the smartest people at SAP and instead of accelerating change and hockey sticks he looked at our lessons learned from 30 years of enterprise software development and derived the concept of timeless software from it.

In a couple of hours (Wednesday 9th 2pm PST) Vishal and Ray will do a live video conversation that you shouldn't miss.

According to some calculations, about 50% of the worlds GDP touches at least one SAP system, that gives us a unique perspective on what is going on at enterprises worldwide.

Yes, technology is accelerating, but the complexity of our systems that are running our companies is accelerating as well. Not sure which one has the upper hand.

I also can't shake the feeling that Mitch Kapor may be right, who called the notion of a technological singularity "intelligent design for the IQ 140 people...This proposition that we're heading to this point at which everything is going to be just unimaginably different—it's fundamentally, in my view, driven by a religious impulse. And all of the frantic arm-waving can't obscure that fact for me.

Rumor has it, that the live twitter stream will be integrated into the video conversation. Tweet with you there soon.