How to be a Genius

Oh darn I thought it was genetics, now it turns out that it's my laziness that prevents me from being a genius. How humiliating ;-)

"It's complicated explaining how genius or expertise is created and why it's so rare," says Anders Ericsson, the professor of psychology at Florida State University in Tallahassee who edited the handbook. "But it isn't magic, and it isn't born. It happens because some critical things line up so that a person of good intelligence can put in the sustained, focused effort it takes to achieve extraordinary mastery. These people don't necessarily have an especially high IQ, but they almost always have very supportive environments, and they almost always have important mentors. And the one thing they always have is this incredible investment of effort." via John Smart

Let's not forget the additional pressure on the parents via that research: "So your daughter is not writing a symphony although she is already pushing 15? I guess you didn't find the right mentor for her, did you?"

... well at least in 2006. People are busy during the last weeks of the year and we at Future Salon Headquarter understand.

Therefore the next Future Salon will be in 2007. As I closed the Salon last Thursday: "Let me be the first one to wish you Happy Holidays"

If you have suggestions for speakers or themes or format improvement ideas please let me know.

Shameless promotion for my sister the artist's work. Every year she would surprise us with a simple beautiful unique handmade Christmas Card.

Sometimes they even came with instructions on how to finish them: Cut here, pull around, connect and add a candle in the middle. Voila beautiful addition to your Christmas decoration, or as it mostly was in my case the start of the holiday decoration.

This year for the first time she is sharing some of her inspirations with you and me. Like the one you see to the left. You can even order them and surprise your loved ones with these handmade beauties. Now that these are available, I may even break with my tradition of not sending out cards ;-)

Update: My sister just informed me, that she is booked out for this year, so sorry that it will not work out this season.

Style is out of Style George Yu at the Future Salon

I tried to lifeblog during the Future Salon and my computer froze on me. Nevertheless here a couple of take aways from the Salon with George Yu.

If you are in Pasadena you should check out the new Honda design center . They deliberately moved the designers away from headquarters into the pedestrian area of the city to connect them to community. They rented a corner store front.

Now the problem is that you want to be part off the community, but your latest prototypes shouldn't be seen. Also you want natural light to come in during the day and interesting light going out in the evening.

The first time he visited the Honda Design team George saw a big CNC machine that they just got to create full size models for their prototype cars. He asked them whether he could use it and they said sure, the machine has downtimes and during these he can create what he wants. He used it to create big milky plastic elements that he and his team put together to create a second layer within the office, light comes through, but you can't see the prototypes within, but there is also enough room to show to the outside world things that are shared. Check it out, it is really stylish.

Style is out of style. George said that if someone comes up to him and says: "I like your style" He doesn't really know what to do. Style just doesn't play a role in his Architectural world.

The other thing that changed in the last 10 years is that you are not looked down upon if you do work for large corporation. It gives you a certain amount of freedom as the corporations have the bigger budgets.

I also had a hallway conversation with him about office furniture, as he was interested in when our building was done. He said that he likes to work with Vitra for office furniture. I know Vitra because a friend of mine did the SAP implementation there and two Winters ago my lovely wife and I visited their design museum.

His reasoning was that the American companies only have the concept of your desk space and then community areas. Vitra has concepts for in between. He said that one of the solutions he just implemented was having really large desks, where several people can work on and you partition them as needed for the current projects.

One thing that I would have loved to try out for myself was the Blow Up art installation where they used 16 oversized balloons and your own movements in them triggered sounds and people would interact and play music with them. Super sweet check out the second video to get an impression.

All in all a very interesting evening.

You may remember the excellent FabLabs Future Salon with Professor Neil Gershenfeld [video] Neil says that in regards to building almost everything we are at the same stage as we were in the 70s with computers: You needed $30,000 and a roomful of equipment to do it.

Let's give it a couple of rounds of miniaturization and everyone will be able to create almost everything on his/her desk. I am cautiously optimistic for such a scenario in the future.

If you want to know what you will be able to do in a couple of years, you should check out what the top Architects with the big budgets are doing right now using the latest digital tools for 3-D modeling and CNC machines. Not only what they are doing, but also  find out what their guiding principles are and why. Technology and money is less and less a limiting factor, other decision elements like the context of a building come into focus.

This thought process is one reason why I am looking forward to tomorrow's Future Salon with Architect Professor George Yu AIA:

Using the latest digital tools for 3-D modeling, prototyping, and fabrication we are redefining the "module" in architecture. At a spatial and material level, we are no longer limited by technology or economics to repeat a single unvarying unit to compose the whole. This flexibility allows for much more responsiveness to context: site, environment, program, culture, and time. In this lecture, I will explain my research into these possibilities by showing examples in recent architectural projects.

Please RSVP (http://tinyurl.com/yhjbze) if you have not done so. 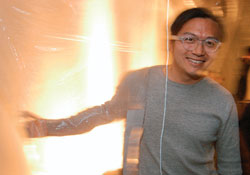 Using the latest digital tools for 3-D modeling, prototyping, and fabrication we are redefining the "module" in architecture. At a spatial and material level, we are no longer limited by technology or economics to repeat a single unvarying unit to compose the whole. This flexibility allows for much more responsiveness to context: site, environment, program, culture, and time. In this lecture, I will explain my research into these possibilities by showing examples in recent architectural projects.

That sounds very interesting to me. Please RSVP (http://tinyurl.com/yhjbze) so we know how much food to prepare and what size room to get.