« Age of Anxiety Future Salon | Main | The Next Five U.S. Disasters & The Future of Disaster Relief » 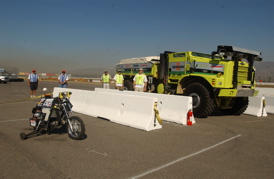 Once again robotic vehicles of a dizzying variety have assembled at the California Speedway for the Grand Challenge qualifiers. Only twenty of the 43 semifinalists will be given a spot in the main event on Saturday. For pictures, videos, details on the teams and vehicles, and official status updates, check out the Tracking Website, and in particular the RSS feed which aggregates both official posts and all the team blogs.

Meanwhile, DARPA has announced that the start and finish will both be in Primm, NV, the site of last year's finish line. The opening ceremony will be at 6am, with a press briefing at 5am. As I announced the week before last, I'm coordinating a road trip from San Diego, after the Salon Friday night. Other Bay Area Saloners are planning to join a Stanford caravan directly from Palo Alto to Primm Friday night, and at least one is considering flying into Las Vegas and getting to Primm from there. If you want in on any of these other plans, I suggest using the bafuture mailing list and/or the coordination wiki page.

For those who can't make it down to Primm, a robot fix can also be had this weekend in San Jose, at Robonexus. If you're willing to help man the ASF table for a shift or two, we'll get you an exhibit pass for free. And one full-conference pass will be given to the volunteer who makes the largest committment, allowing him/her to attend the sessions when they are not table-tending. To sign up, email asf_ed@yahoo.com.