« Alternative Energy Solutions for Supporting Human and Other Forms of Life | Main | This Friday 28th: Who are you? Future Salon » 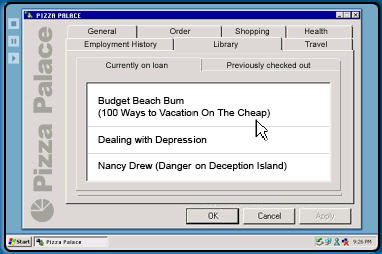 ACLU has an excellent video clip out that beautifully crystallizes what is at stake with you and your Identity.

So you got "Dealing with Depression" out of the library or bought it from Amazon. How interesting.

Good motivation for you to come to this Friday's Future Salon: Who am I? Your identity online and beyond. (Details below)

Reading about it I also stumbled over Kim Cameron's Identity Weblog. He is in the middle of a great discussion about the Laws of Identity,which he says people who work on or with identity systems need to obey. He just introduced The Sixth Law. Let's see if our speakers live up to his bar.

It would be interesting to have him this Friday too, but no we are not changing the format or moving the event again. :-)

We have three presenters:

Google will be represented by Eric Sachs

Mr. Sachs is currently a product manager at Google in the Consumer Web team. He is responsible for the Google Account common login system and managed the orkut.com service during its first six months of operation. Mr. Sachs was previously the CTO and co-founder of Interliant which provides hosted computer outsourcing services. Interliant grew to 200 employees and $20M in revenue before being acquired in 1999 by a holding entity that took the Interliant name and went public in July of that year. During his time at Interliant, he co-developed software with both IBM/Lotus and Microsoft. Eric Sachs graduated Phi Beta Kappa with a B.A. in computer science and managerial studies from Rice University

PRESENTATION Have you ever Google'd an interview candidate, or date, or other person you were going to meet? Are you embarrassed that the top Google search for you shows a dance award you won in college? Or do you find it is actually hard to do Google searches about people?

We will discuss what things people are doing today to try to define their "digital identity" in Google searches through Blogs, social networks, and other techniques. We will also discuss why those are only starting points, and the additional challenges that exist to solve this problem, especially around security of that information.

Liberty Alliance will be represented by Jeff Hodges:

Jeff Hodges is a protocol architect who recently joined NeuStar.biz, a neutral, trusted 3d party provider of operational support services to the telecom industry. He'd spent the prior nearly three years at Sun Microsystems on its Project Liberty team, where he co-authored several of the Liberty Alliance protocol specifications. Prior to Sun, he was a Principal Engineer at Oblix where he contributed to OASIS's Security Assertion Markup Language (SAML) effort and consulted with Oblix's product team. Prior to Oblix he was in the Networking Systems department at Stanford University where he deployed Stanford's first LDAP-based directory service and contributed to the LDAPv3 effort in the IETF.

Presentation: Identity is a fundamental notion underlying, and enabling, interactions between people. Whether interacting as customers, suppliers, partners, employees, citizens, officials, or anonymous passerbys -- we, and the tools we wield, need to be able to make and understand statements such as: "hi, 'I' am here", "send 'that' to 'them'", "'I' request a copy of 'that' from 'you'". This brief talk summarizes the foregoing and illustrates the primary use cases addressed by the open, freely-available Liberty Alliance specifications for "identity federation" and "identity-enabled web services".

Fen Labalme who is one of the key developers working on the Identity Commons code will introduce his view on online identity.

Fen Labalme has been working on privacy-enh anced personalization systems since creating News``Peek, the first personalized information system, in 1979 at the then-nascent MIT Media Lab. As part of his research into personalized information, he coined the term [http://broadcatch.com/definition.shtml broadcatch] to describe a suite of "many-to-one" technologies designed to provide information the way people really want it: timely, trusted, and on target. Fen co-authored [http://journal.planetwork.net/article.php?lab=reed0704 The Social Web: Creating An Open Social Network with XDI] and is the primary author of the seminal [http://www.broadcatch.com/lumeria/paper1/index.shtml An Infomediary Approach to the Privacy Problem] and [http://www.openprivacy.org/papers/200103-white.html Enhancing the Internet with Reputations] white papers. He is currently CTO of Identity Commons and 2idi, creators of the first i-broker (released as open source code). Fen can be reached via his i-name enabled contact gateway at http://public.xdi.org/=Fen.Labalme

Presentation: Who has control over your online identity could become the most important issue facing people using any network in the near future. It is my strong belief that the right answer to that question is "you." Identity Commons and 2idi have teamed up to create a new form of "social technology" necessary for trusted electronic communications. I-names (OASIS standards-based, persistent, portable and private identifiers) form the core of this system and community-based social contracts provide the fabric for reputation management; together they enable new forms of membership management, social networking and permissions-based marketing. This talk will touch on these aspects, as well as the unique, grassroots, evolutionary approach we are taking to ensure that what we build is what you want.

This is quite a handful.

Improve your commute by sharing it with a fellow Futurist. Check the Ride Board for opportunities.

As always free and open to the public. Spread the word. To be able to calculate food and drinks please RSVP if you are coming by sending an email to mona dot bhardwaj at sap dot com or to me.

See you all there.