« This Friday 28th: Who are you? Future Salon | Main | Happy Birthday Sailor »

Mike Rowehl has posted a couple of pictures from last Friday's Identity Future Salon on Flickr using the FutureSalon Tag. 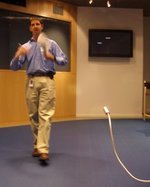 Even more impressive is, that Niall Kennedy has his sound recordings of the event already online.  To the right you can see Eric Sachs from Google in action and Niall's microphone recording him with his Apple Powerbook.

What you are not getting from his cut is the round of introduction of the audience and the quirky things that they have found online about themselves or the story about the identity theft from a lawyer. To experience that, you have to come yourself :-)

When I saw the RSVP list for the event, there were about 25 people on it and I thought, that is going to be a nice intimate gathering. Love it. But then at least twice as many showed up and we packed the Southern Cross Room at SAP again. Great interaction and interesting insights from the speakers as well as from the audience.

Interesting side note: Neither Fen nor Jeff the people working the closest with identity systems are using a Fastrack or a Safeway Club Card. [If you read this Slashdot story you may understand why.]

Now it does, don't know who played a trick on me here. Enjoy, Mark.