Pleasure seeking: the basis for all decisions

Is each of our decisions is ultimately driven by pleasure-seeking, even though it might not be obvious all the time?

The new pleasure seekers
Cabanac then promised the students increasingly large lumps of cash to endure the pain. The more he offered, the longer they suffered. Ironically, Cabanac's experiment was part of a broader investigation into the science of pleasure.

Continue reading "Pleasure seeking: the basis for all decisions" » 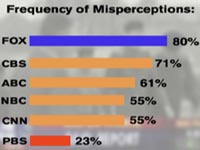 On our bafuture yahoo group there is quite some discussion going on regarding the What is wrong with TV News? post.

Quite fitting to that theme, there is a great chance to see how the media is covering the Iraq war in the new movie: Weapons of Mass Deception playing this weekend at the Embarcadero (and in Berkeley too).

Please take a break from the Holiday frenzies and join us for the 7:30 showing tomorrow Saturday 11th of December at the Embarcadero theater. Danny Schechter the director will be at hand to answer some questions after the film. If that wasn't enough, we will head to the next watering hole afterwords for more discussions too.

The Chicago Reader says it goes beyond Michael Moore and offers a "comprehensive and devastating critique of the TV news networks complacency and complicity in the war in Iraq ....brilliantly argued and well documented ." .

Finally you can get/auction your 60 mpg Smart Car to drive here in the US. The eBay thing is a publicity stunt, don't bid on that car, it is way to expensive already, although there are still 8 days left to bid. They are testing the water. It should be way cheaper than the Mini which starts around 18K.

I hope they bring the Diesel version too, that gets you additinal 10 mpg: 70 mpg take that you heavy hybrids :-)

What is wrong with TV News?

On my way home today I was listening to NPR's Cleveland City Club Forum with Av Westin presenting: What is Wrong with Television News?

He sees politicization, as some call it foxification, as the worst trend in network news. "The reporter being visibly appalled when hearing an opposing opinion." Av stressed, that his is not talking about the opinion journals like the Bill O'Reilly show, which was the first face that came to my mind when I heard this.

The reason behind it is not a conspiracy, but quite simple the ratings game. If you ask the American populace they are about evenly divided into 40% that call themselves conservative and 40% on the liberal side and 20% that don't want to be put in either of these boxes.

Continue reading "What is wrong with TV News?" »