Doug Engelbart was the most inspiring speaker at the AC2004 conference.

He is a true visionary and a real role model to me.

When he was young he set this principle for his life: 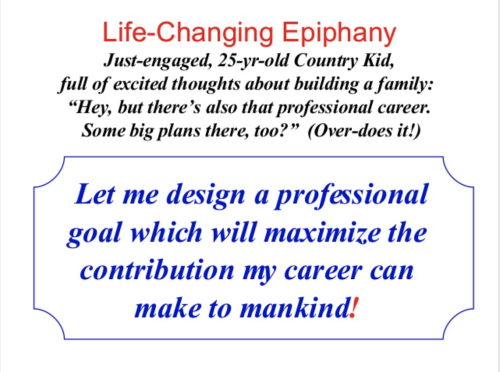 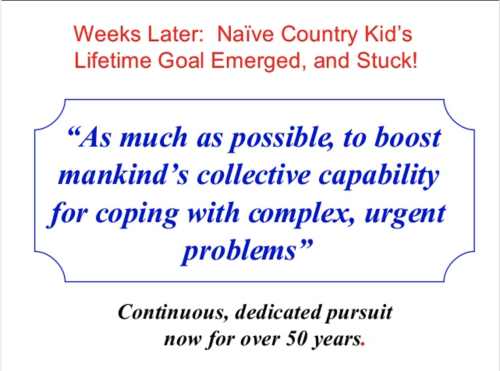 50 years later this goal is still driving him. Makes me think: what was that again that is driving my life?

He compares us (the world) to a bus with little compartments (different countries). The bus is traveling over a bumpy road it is dark and the headlights are not working very good so the collective visibility into the future is not very good. From the compartments, people are trying to steer the little bus. The problem is, that the bus is going at an ever-faster pace (Accelerating Change). How he is asking, can we collectively bring this bus back under control?
(By the way, he is looking for a cartoonist to illustrate that vision. Get in contact with the Bootstrap Institute if you want to do such a project.)

What we need is to augment our own collective capabilities. We need to develop a CollectiveIQ as he calls it a CODIAC system - Concurring Developing, Integrating, and Applying Knowledge. A dynamic knowledge repository.

What fascinated me in his speech was how often he said "and then I saw" or "I had a vision and all in a sudden it became clear to me".

By looking at the world from his goal's perspective he was able to continuously see possibilities that all others overlooked.

Once asked: "If it doesn't fill him with pride, that his invention the mouse is on every desktop?"

He answered: "Not if I think of where we could be."

He was over his time already and when he asked "How much more time do I have?" Without a beat, someone in the audience shouted: "Take the rest of the day."

Unfortunately, that was not possible. But because I knew that would happen, I invited him to the Future Salon this month.

He has graciously accepted that offer. Therefore Next Future Salon on Friday the 19th of November with Doug Engelbart.

SAP Labs is proud to be the sponsor of this event.
We will have light refreshments starting at 6pm the presentation will be from 7pm until 9pm.

This one you shouldn't miss. As always free and open to the public.

His AC2004 presentation is now available on Youtube too :-)
Including a link to his slides where the above screenshots are from.

Were we supposed to get a confirmation email from Mona. I sent the email as you said but never got any response.

We don't send out confirmation emails. Your RSVP is a way for us to find out how big the interest is. Last time it was so packed, that people sat on the floor. If it is more we have to move into a bigger room. I'd rather pack southern cross because it usually leads to great interactions compared to rows and rows of chairs.

We will see, Mark.

I'm in SF (NorthBeach). Anyone going from here? Don't have a car. Don't have another way of getting there. This looks really interesting.