Tomorrow: Update to the Half Manifesto by Jaron Lanier 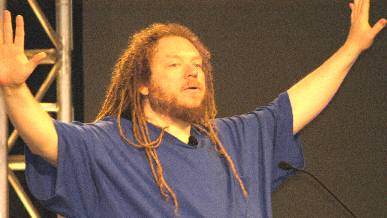 Within thirty years, we will have the technological
means to create superhuman intelligence. Shortly after,
the human era will be ended.

If this prediction comes true, we have 19 very interesting years ahead of us before the computers run the show.

Not so fast said Jaron Lanier in his One Half of a Manifesto (September 2000):

The primary candidate for such a flaw as I see it is that cyber-armageddonists have confused ideal computers with real computers, which behave differently.
...
But technologists are the inevitable winners of this game, as they change the very components of our lives out from under us. It is tempting to many of them, apparently, to leverage this power to suggest that they also possess an ultimate understanding of reality, which is something quite apart from having tremendous influence on it.
...
In order to embrace an eschatology in which the computers become smart as they become fast, some kind of Deus ex Machina must be invoked, and it has a beard.
...
There is a lovely global flowering of computer culture already in place, arising for the most independently of the technological elites, which implicitly rejects the ideas I am attacking here. A full manifesto would attempt to describe and promote this positive culture

Almost 4 years have passed. Time to check in with Jaron Lanier to see how the full manifesto is coming along. Here a more recent quote from his web page:

One of themes I talked about is the sense of a metaphorical “ramp of progress” that people often internalize to frame the past and future in technological and dynamic societies. I compared the technological ramp (which has fire and the wheel in the distant past and perhaps Star Trek and The Jetsons, or a singularity, in the future) with the moral ramp (which has the Ten Commandments in the Past and peace in the future), and then presented a third ramp, which concerns ever expanded means of interpersonal connection. This ramp has the inception of language in the distant past and perhaps something like shared, intentional, waking-state dreaming, what I sometimes call “post-symbolic communication”, in the future.

Interesting stuff. You can see him life tomorrow 23rd of April 7pm at the Future Salon.

The Salon is from 7pm - 9pm. Please join us also for dinner afterwards in Palo Alto.

What I often forget to mention the Future Salon is free. Well, you pay for your food at the restaurant afterwards.

Check also the cartoon about him on his web page.